In a typical American city, the local daily newspaper is the outlet producing the most news day after day. But that doesn’t mean it’s the most popular outlet — a local TV station will often edge it out in terms of digital audience. And on Facebook? Forget it, print fans: Local TV is dominant. 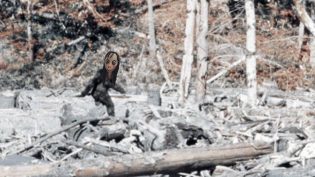 That means that what local TV stations publish on Facebook is important. They retain generally high levels of trust, and they’re reaching an audience that might not be seeking out much other news on digital platforms. That power can, of course, be used for good or for ill.

It’s also the subject of a new paper which examines how local TV stations use their Facebook prominence — and what works for them in terms of making content that spreads. It’s titled “Local News on Facebook: How Television Broadcasters use Facebook to Enhance Social Media News Engagement,” and it’s by Miao Guo (University of Connecticut) and Fu-Shing Sun (Ball State University). Here’s the abstract:

For each, they identified the station’s 10 most popular Facebook posts in each month of 2019. So that’s a total of 120 posts per station, 1,080 posts for all nine. Knock out 17 for various forms of technical screwiness and you’re left with a set of 1,063 posts.

These posts were all, by definition, big hits for their stations. On average, they generated roughly 7,800 reactions (👍, ❤️, 😂, 😯, 😢, 😡), 1,300 comments, and 5,200 shares. (Remember the different market sizes at play here; New York and L.A. are driving those totals more than Marquette and Montgomery.)

I think this limits the usefulness of the research a bit. Rather than examining all a station’s posts, Guo and Sun are only looking at the most successful posts and looking for trends within that subset. So we don’t know how posts of any particular type are distributed throughout the entire corpus. Still, though, this gives us some insight into what stations’ biggest hits on Facebook look like.

Some of their findings:

Despite producing hours of fresh video every day, local TV stations don’t rely too heavily on video content on Facebook. Of their top-performing posts, only 9.9% included a video. The other 90.1% featured only an image or one kind or another — either attached to the post or embedded via OpenGraph. (No text-only posts made the list.)

Remember how Facebook execs used to say the platform would be “be probably all video” in five years? Well, there’s no doubt that the Stories-ification of social media has way upped the amount of video in feeds. But for news publishers — even those in local TV — text and still images are still dominant.

That said, among these top-performing posts, those with video did earn more reactions, comments, and shares than those with only an image. Perhaps it’s easier for video to spark a higher level of virality than a mere image. Since the study is limited to those high-flying posts, it can’t say anything definitive about the performance of video vs. images on average.

They also don’t link out much.

Of the posts studied, only 16.1% included a link of any kind — the vast majority of them, no doubt, back to the TV station’s website. That’s not far off from Facebook’s average; in Q4 2021, 14.6% of all content views were on posts containing a link. (A reminder of just how much Facebook has trained the world to make content specifically for its walled garden.)

But as with video, posts with links significantly outperformed posts without them, drawing substantially more reactions, comments, and shares.

Guo and Sun divided the Facebook posts into 15 subject-matter areas. (“Funny Cat We Found On TikTok” was surprisingly not one of them.) Among the most popular: emergencies and public safety (14.1%); civic information (11.0%), crimes and justice (11.4%), and local community (meaning a story focused on a local individual, 17.1%). 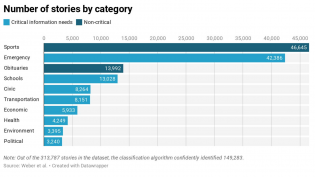 Facebook users reacted to different categories in quite different ways. Posts about emergencies generated lots of shares, but many fewer reactions and comments. Meanwhile, sports posts were below average on reactions, and way below average in terms of comments and shares. (That’s interesting, given that sports is one of the leading topics on local news Facebook pages.)

Want to maximize for comments? Post about politics and consumer issues; avoid transportation, animals, and the environment.

Want to maximize for reactions? Post about people in the local community; avoid transportation and health issues.

Want to maximize for shares? Post about emergency situations and health issues; avoid sports and education.

(Want to maximize for journalism? Don’t follow any of these rules as if they’re holy law. They’re not — just some data. YMMV.)

Posting during breakfast is good for engagement.

The researchers looked at posting times divided into three-hour blocks (12:00 a.m. to 2:59 a.m., 3:00 a.m. to 5:59 a.m., and so on). The clear winner was the 6:00 a.m. to 8:59 a.m. slot, which on average generated the most reactions, most comments, and most shares. Remember, we’re talking about the posting time, not the time of consumption; the mysteries of the algorithm were still putting those posts in front of users hours later. The only other slot with consistent overperformance was 6:00 p.m. to 8:59 p.m., though only its increase in comments was statistically significant. On the flip side, afternoons were consistent downers for posting.

Again, though, remember that this study is only looking at stations’ top-performing posts — so while some time slots might seem to overperform, that doesn’t mean those slots are when most of the most viral posts. As you can see when looking at the timing distribution, the largest share of successful posts go up during the 9-to-5 workday.

Posts with hashtags were much less popular than those without.

Are you, in 2022, using hashtags in your Facebook posts? Stop, already. People say mean things about you behind your back.

Yammering on won’t kill you, but it won’t help much either.

The average length of a successful Facebook post in this study was 22.78 words. That’s about the length of this paragraph you’re reading.

Did going longer than that mean death to virality? No — longer posts actually did slightly better than shorter ones in terms of engagement. But the difference was tiny and not statistically significant.

All in all, this paper finds that local TV stations on Facebook look not so different from…everybody else on Facebook. Their bond with viewers just lets them do it on a much larger scale. Just as Twitter feels natural for newspapers and their digital kin, Facebook feels like local TV’s natural environment, and it’s paid off for them.

Its bigger questions loom over the next generation of platforms, most notably TikTok. Local TV news was bleeding young viewers even before the shift to streaming accelerated; now young people barely watch broadcast TV at all. If they’re going to have any connection with younger audiences, local stations will have to learn to compete on the platforms the kids are using today, not just the one their parents still use.