For years, a popular giveaway prize at KKBI-FM in Broken Bow, Okla., has been tickets to Texas Rangers games. The radio station carries the broadcast over its airwaves, and if a listener is lucky enough to get the morning’s famous impossible question correct, they’re rewarded with tickets to a ballgame.

And for years, even nearly 200 miles away, residents in the Broken Bow area have been willing to make the drive. Until recently.

Sharla Thomas, an office manager at the small radio station, has noticed the trend in the last year or so. Instead of accepting game tickets as a prize, like many were eager to do previously, some listeners have sought gift certificates to local restaurants instead. That prize helps their bottom line, rather than denting it.

“It’s hard,” Thomas said. “The gas thing, that’s been getting a lot of people here recently.”

It’s no secret that the cost of living has gone up in recent months. Signs of inflation are everywhere: from the price of groceries, to the climbing cost of air travel, to the sticker shock at the pump. According to U.S. Bureau of Labor Statistics, the consumer price index rose 7.9% from February 2021 to February 2022, the same month that Russia invaded Ukraine. The increase marks the highest jump in 40 years, according to CNBC, while paychecks dropped 0.8% in the same month.

Translation: The cost of living is up, and budgets are tighter. But has that — and will that — affect sports and the fan experience in the Dallas-area, including Monday’s home opener for the Rangers at Globe Life Field?

Like gas prices, concession prices are an easy-to-spot price point.

Walk around the concourse at any arena or stadium and the prices of food and drinks are in the consumer’s face. If there were to be a drastic change, it would be noticeable. At American Airlines Center, home of the Mavericks and Stars, there’s no need to check if inflation has changed those prices.

Dave Brown, the chief operating officer and general manager of the center, said the prices for concessions during events was set months before the season and that they don’t plan to change those prices due to recent inflation.

“We’re just different than a retailer or a big-box retailer that adjusts prices continually based on the cost they’re seeing,” Brown said. “It would be too cumbersome for us to adjust our pricing and have that dynamic pricing throughout the season.”

Brown said the center will factor inflation results from this season when it sets concession prices next year, but there are a lot of metrics that go into it.

“There are a lot of analytics that go into picking a player,” Rapp said.

And there are a lot of factors that go into setting price points for the baseball season. It influences what goes into the stadium’s food lineup, from the 24-inch long “Boomstick” hot dog, to the brisket egg rolls —just $11 a plate.

Rapp said the process started back in November and was finalized in January. Like American Airlines Center, those advance plans don’t change, but prices will be up from last season, Rapp said. Dollar hot dog nights and dollar ice cream days from Blue Bell will still be around, however.

Higher concession prices shouldn’t come as a surprise, regardless of the consumer price index.

Team Marketing Report, a sports business website that offers data-driven insights, produces annual fan cost index reports designed to show the cost of going to a game for a family of four.

One price point that is a little more dynamic is the cost of tickets on third-party marketplaces. CNBC reported in January that ticket prices for NBA and NHL games were up to $94 on average across both leagues, according to Seat Geek, and resale prices on marketplace were up 28% at the time.

The price of tickets, however, isn’t normally inflation-driven, according to Texas State economics professor Todd Jewell. That’s especially true on ticket marketplaces, where demand is what creates price points.

Rising ticket prices shouldn’t be that much of a deterrent for fans anyway, because fans are naturally a group of people that aren’t very price responsive, Jewell said.

“If fans are price responsive, then when price goes up, demand goes down,” Jewell said, “but generally we don’t find that fans are very price responsive. They’re willing to soak up that extra price.”

The numbers back it up. Even in 2022, as inflation rises and people are trending toward post-COVID-19 normalcy, the Mavericks have the third-highest average attendance in the NBA at 19,714. It’s comparable to the team’s 2019 attendance, which was 20,013. The Stars, meanwhile, are averaging about 2,500 fewer fans per night.

Even as national ticket prices rise, the Mavericks and Stars are still on the more affordable side.

“On StubHub, average ticket prices for the Mavericks and Stars have been trending more affordable in recent months, in comparison to 2021 prices,” Michael Silveira, a StubHub spokesperson, wrote in a statement.

Fans are showing they’re willing to go to games and even travel to do so.

According to Vivid Seats, a ticket marketplace, the average distance between ZIP codes purchasing tickets for events in Dallas-Fort Worth and the events themselves was 127 miles in January — a month before gas prices started to skyrocket. In March, well into that period, that average increased 137 miles.

Still, not everyone is capable of traveling.

Thomas, the office manager in Broken Bow, is a huge fan of the Rangers. Her favorite player is outfielder Joey Gallo, and she still loves the team despite them trading Gallo to the Yankees last year.

There are plenty of others in Broken Bow like her, she said. One friend in town made it an almost-weekly tradition in years’ past to go to games. Back then, the three-hour drive, as well as the price of a hotel, was worth it. With costs rising, they don’t expect that to be the case this season.

“It’s hard to go anywhere,” Thomas said, referring to the price of gas and the effects that has on a budget.

On Monday, when the Rangers open up at Globe Life Field against the Colorado Rockies, there’s expected to be a lot of excitement. The Rangers brought in a lot of talent in free agency — paying a lot to do so — and fans are eager to see what that investment plays like.

A good crowd is expected to be there, but because of recent inflation, surely not everyone who wants to can attend the game.

Here’s a look at concession prices at local sporting events this year compared to 2019. 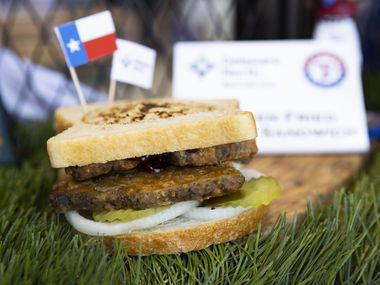