PHOENIX – JaVale McGee is no stranger to the world of giving back.

The former Phoenix Suns center developed his philanthropic spirit at an early age, thanks to his mother, Pamela McGee. A parent of two, and a former professional basketball player, Pamela instilled the values through the Bible verse, Luke 12:48. Today, JaVale is the walking embodiment of those minimal but powerful words of wisdom through JUGLIFE, a foundation established in 2013 to address water-related crises around the world.

“For JaVale to be in the NBA for 14 years, I’ve always told him, ‘To whom much is given, much is required,’” Pamela said. “So it’s essential to plant seeds and give back.”

JaVale, business partner Kez Reed and JUGLIFE as a whole aim to provide clean and safe drinking water in under-resourced and underdeveloped areas of the world and emphasizes the “need to appreciate, conserve, and promote water for a successful life.” JUGLIFE’s commitment to bringing awareness entails everything from traveling to various schools to host “water education” assemblies and traveling abroad to establish clean water sources in different countries.

A native of Flint, Michigan, JaVale isn’t new to the difficulties that certain under-resourced communities face when it comes to gaining access to fresh water. One of the most staggering cases of environmental injustice in American history hits home. On April 25, 2014, shortly after McGee started his charity, officials switched Flint’s drinking water supply from the Detroit city system to the Flint River to cut costs.

However, unbeknown to the state and local officials making the decision and the community, the new water supply had high levels of lead from failures to filter the water properly. Reed and McGee worked to address the issues by sending water to his hometown and seeking long-term answers to address the dilemma. 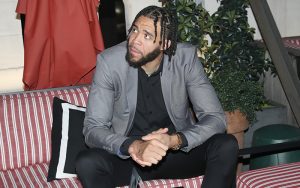 Former Suns center JaVale McGee grew up in Flint, Michigan, where water was at the center of a high-profile case of environmental injustice. (Photo by Johnny Nunez/WireImage)

In 2015, JUGLIFE widened its pursuits to Uganda to construct wells within the community. They have been back twice since, each time partnering with Hope 4 Kids International in efforts to ensure that the residents are educated about how to maintain and operate the community’s wells as the country currently ranks third in the world for worst access to clean water.

“Being out there is extremely humbling; it’s an amazing experience, just because you see people who don’t have a percentage of what we have, and their only need is water,” McGee told SLAM in 2018. “My plan personally is to go every summer and just experience that, and hopefully bring more and more people each time.”

JUGLIFE initially partnered with Hope 4 Kids in 2014. Hope 4 Kids is a nonprofit organization that has brought clean water to over 2.75 million people around the world, specifically Uganda. Since his initial trip, McGee has returned to Uganda multiple times to establish more community wells.

“Jug life has been an awesome partner,” said Angie Simon, Vice President of International Development for Hope 4 Kids. “They’ve personally traveled with me three times to Uganda to dedicate some of these wells out in these remote villages at these primary schools. We’re talking like 1100 children at a school that doesn’t have access to clean water.”

“We thought it was an excellent turnout, it was a wonderful event,” Simon said. “We love having that joint partnership, it gave us an opportunity to bring out hope for kids supporters to the events. As far as the impact, it brings more awareness to the problem of the lack of clean drinking water around the world.”