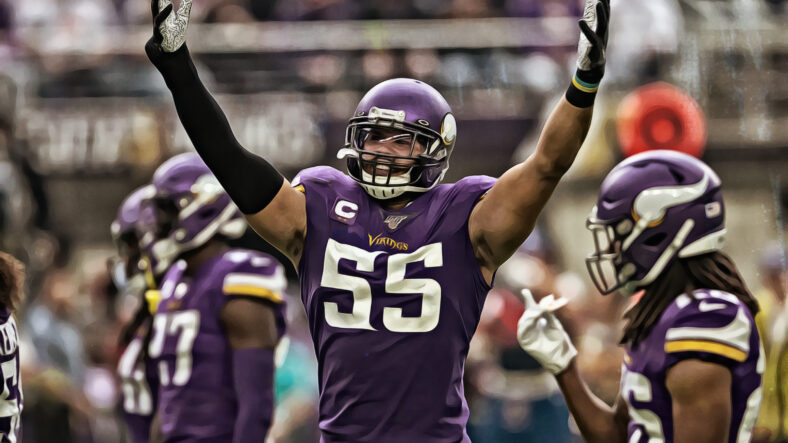 More than two months are in the free-agency rearview, and former Minnesota Vikings linebacker Anthony Barr is unsigned.

Drafted by Minnesota in 2014 at the dawn of the Mike Zimmer era, Barr played eight seasons for the Vikings, tallying four Pro Bowls from 2015 to 2018.

Barr remains mysteriously unemployed, though, with multiple waves of free agency passing by the UCLA alumnus.

Some have speculated that Barr is more injured than once thought and perhaps contemplating retirement. Yet, until concrete resolution surfaces, Barr is only 30 years old and should have three to five seasons left in the tank if his knee is not hampered.

On Barr to Dallas, Barnwell wrote:

“Now that [Barr’s} a free agent, what if a team took a chance on using Barr in more of a hybrid role? We saw the Cowboys unlock something truly special from Micah Parsons by using their 2020 first-round pick as both an off-ball linebacker and an edge rusher a year ago. Barr isn’t Parsons, but after Dallas lost Randy Gregory this past offseason, Barr would give the Cowboys another eligible rusher who is also capable of playing a more traditional linebacker role. Barr and Leighton Vander Esch would each be leverage against the other’s injury history, and senior Cowboys defensive assistant George Edwards served as Barr’s defensive coordinator between 2014 and 2019.”

Barr implied his Vikings days were over when the 2021 season ended, posting this to social media:

If Barnwell is correct, Barr will mesh well in Dallas, a team competing for a Super Bowl and not needing Barr to rule the roost. Opposite Micah Parsons — who is extraordinary — and Leighton Vander Esch, Barr would wind down his career in a complementary role.

Barr was often the interior glue for Mike Zimmer’s defense in Minnesota, evidenced in 2020 when the defense plunged to hell without him. Since the start of 2020, Barr has missed 63% of all football games, substantiating the theory that injuries are catching up to the man.

Other free-agent theories by Barnwell? Julio Jones to the Colts, Odell Beckham to the Packers, and Ndamukong Suh to the Browns, among other examples.

Barnwell also predicted wide receiver Jarvis Landry to the Ravens, but that was false as Landry signed with the Saints on Sunday.

Barr has also been rumored to join the Jets.

Dustin Baker is a political scientist who graduated from the University of Minnesota in 2007. Subscribe to his daily YouTube Channel, VikesNow. He hosts a podcast with Bryant McKinnie, which airs every Wednesday with Raun Sawh and Sally from Minneapolis. His Viking fandom dates back to 1996. Listed guilty pleasures: Peanut Butter Ice Cream, ‘The Sopranos,’ and The Doors (the band).